Tick Performance team made the drive to Shadyside Dragway for "ShackMania 2018", one of the biggest stick shift races in the Carolinas to compete with Jarvis' twin turbo Trans Am and Tommy's nitrous Camaro against some of the fastest stick cars on the east coast.  With the no time heads up format, two test hits were given then random draw for opponents in eliminations.  Tommy was able to make it to the 2nd round in the main event class before he was taken out of competition, but breaking his personal best with the first time out with new engine and direct port nitrous setup.  Jarvis would be eliminated in the first round but made it all the way to the semi finals in second chance before losing but breaking into the 5s and setting his personal best et and mph!!!!!!!  Both cars will be representing Tick Performance again at Street Car Takeover Concord as we will see what numbers we can put down in the 1/4 with both cars!!!!!! 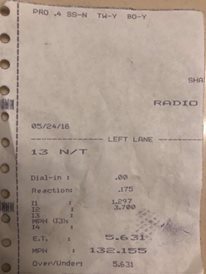