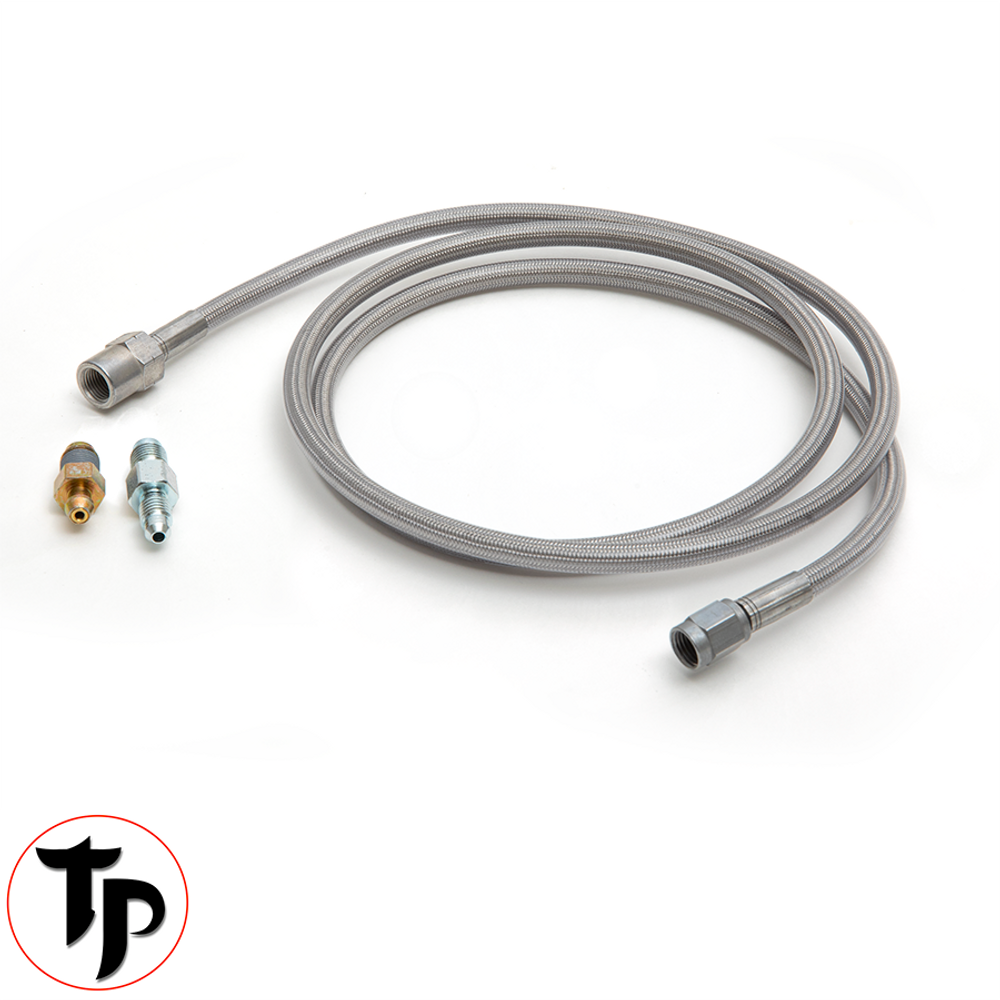 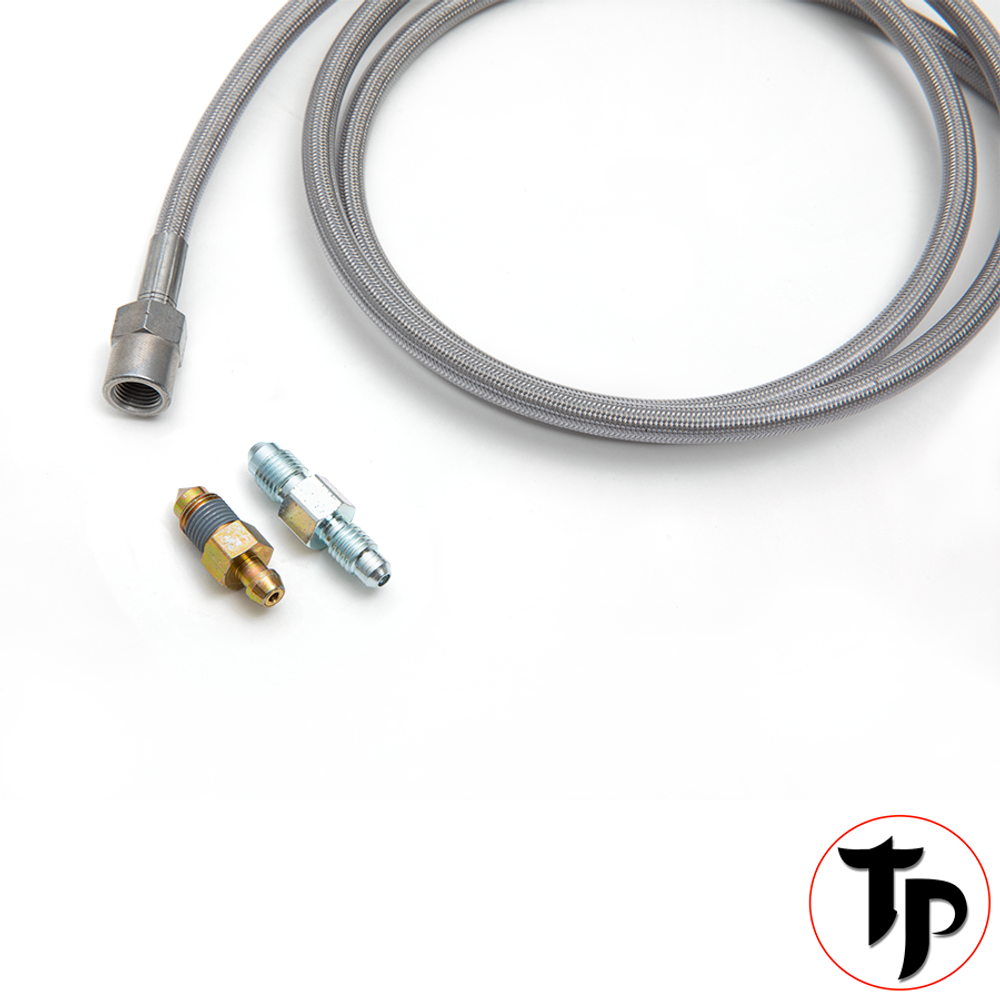 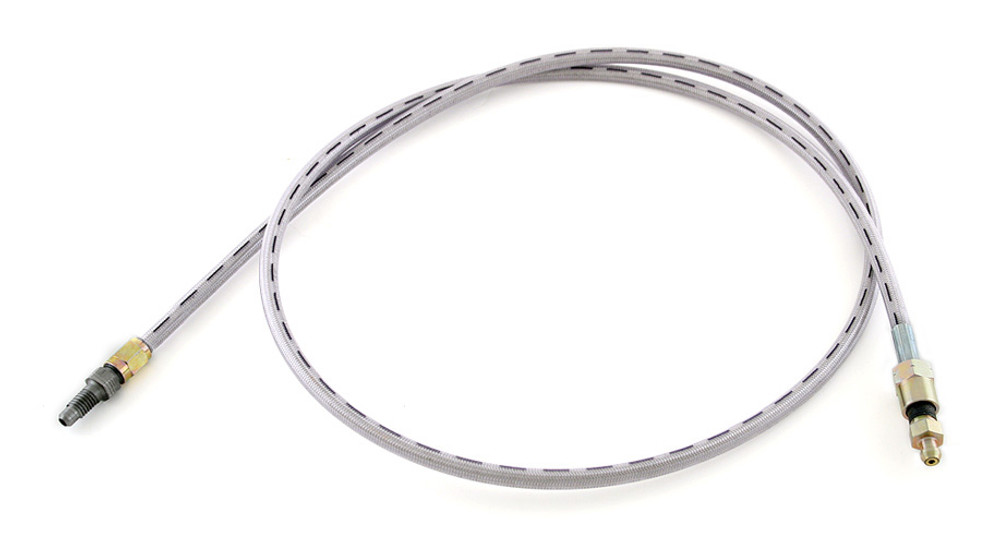 Bleeding the late model GM hydraulic system in it's stock form is a hassle. You've got to have someone pump the pedal while you're under the car cracking the bleeder and hoping everybody's timing is right - not to mention keeping the reservoir full! It's easy to see how something so simple can quickly turn into a huge ordeal.

With our "One Man Job" Remote Clutch SPEEDbleeder Line, Tick Performance is taking great strides in making things much easier on you. At 4'+ in length, you're able to route the line to nearly anywhere on the car you want. Here in house, we usually zip tie it to a brake line coming out of the brake master cylinder so it's easy to reach with the hood popped. Another huge improvement is our SPEEDbleeder end - allowing you to simply crack it open one time and close it once the air is out of the system, instead of having to open and close the bleeder with every pump of the pedal.

Why wrestle with your hydraulic system every time you want to bleed it?  Rely on Tick Performance to make the job much easier for you with our "One Man Job" Remote Clutch SPEEDbleeder Line. A must-install next time you've got the transmission out of your:

5 based on 12 reviews.
leave a review

Had the trans out and added this to make life easy in the future. Definitely makes bleeding the fluid much easier

I JSU installed the clutch remote bleeder On my 2010 Camaro SS. It does take a bit of patience to install without dropping the transmission but it is doable. This setup makes it super easy to perform the task now!!

this is a must when upgrading your sloppy dual mass flywheel (CTS-V1) to an LS7 kit.

Glad I bought this for my G8, made it a breeze to bleed the clutch system.

If you are able to use this speedbleeder on your car it will be the best money spent as it makes bleeding the clutch slave cylinder a breeze. Without it then you are looking at a 2 person job. With this it's just a few pumps of the pedal and you have no more air in the system. I love it

Worked great. Fits nice up behind the coolant reservoir when done.

The line does exactly as stated. Makes bleeding a much easier job and much quicker! I wish the bleeder valves weren't so finicky to open just far enough to work and not to far to allow air but that's not Tick's fault at all. I have bought one for every car I own and will continue to buy them as needed. Price is at the top of what I'd pay for this type of adapter but the great customer service I've gotten every time I've called makes me come back and continue buying the "extras" every time! Great company!

made very well...very nice.... makes it a lot easier to bleed your clutch...this is a must have for clutch repair on your vehicle.... with the remote bleder it makes it a one man job...no more having someone pump the clutch while you bleed it...

Called and the folks were both friendly and helpful. The remote bleeder is high quality and worked great! I don't know how I could have bled the LS7 clutch slave without it! Super easy to install and use. Thank you!!!

Worked as advertised! It makes a simple job of clutch bleeding!